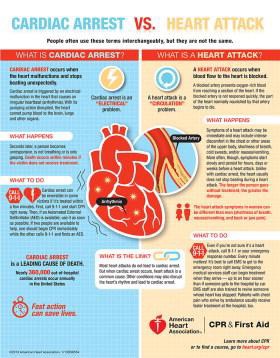 Each year in the United Stats and other countries, the month of February is observed as Heart Month. In Jamaica we observe heart month with several activities over the course of the month led by the Heart Foundation of Jamaica, the Cardiology Unit at the University Hospital of the West Indies and other cardiologists and heart centres promoting awareness of heart disease prevention and early detection and treatment. This year, the theme for heart month is Sudden Cardiac Arrest.

The first Friday of February is also typically observed as Go Red for Women day, raising awareness for heart disease in women in particular. This is because heart disease is typically believed to be a disease predominantly affecting men, but women are equally affected by heart disease and the symptoms tend to be less dramatic and typical and as a result are often ascribed to other diseases. This is of course close to my heart, as a woman and as a cardiologist taking care of women with heart disease.

In the United States, 1 in 4 women dies from heart disease. The most common cause of heart disease in both men and women narrowing or blockage of the coronary arteries, the blood vessels that supply blood to the heart itself. This is called coronary artery disease and it happens slowly over time. It’s the major reason people have heart attacks.

Heart diseases that affect women more than men include
• Coronary microvascular disease (MVD) – a problem that affects the heart’s tiny arteries
• Broken heart syndrome – extreme emotional stress leading to severe but often short-term heart muscle failure
The older a woman gets, the more likely she is to get heart disease. But women of all ages should be concerned about heart disease. All women can take steps to prevent it by practicing healthy lifestyle habits.

So what can you do?
• Know your numbers – get screened for heart disease by age 20 years old. This can be done with your family doctor, sit with your doctor and have them go through your history in detail and examine you thoroughly, adding some blood work – Blood glucose, cholesterol CRP(Marker of inflammation) to your evaluation. Additional testing such as ECG would be at the discretion of your doctor. If your initial screen is good, then your doctor would recommend follow-up every 5 years. At age 40, schedule at least an annual review.
• Keep moving! Plan to have do at least 150 minutes of moderate physical activity per week
• Eat well – eat a diet rich in fruits, vegetables, whole grain and low in processed foods and simple carbs
• Self-care – a buzz phrase for the last few years, but such an important aspect of life, particularly as a woman. We often put the interest of others – ahead of ours, and neglect self care. Take care of your emotional needs, have positive self-talk, rest well and check in with yourself often. Emotional stress is one of the leading causes of presentation to the cardiologist with symptoms of anxiety and depression.

Signs you may have a blocked artery

Signs you may have blocked arteries or a heart attack.
A heart attack – known in medical jargon as a myocardial infarction or MI for short, occurs when plaque that has been building up in your coronary arteries rupture and a clot forms leading to sudden blockage of blood flow to the heart muscle. In some cases, there is severe blockage of the arteries, which limits the blood flow during times of physical stress – such as running, brisk walks, swimming etc. In this case, there is no plaque rupture, and is called angina pectoris – for chest pain.

The heart is a muscular pump and relies on a constant supply of blood – which carries essential nutrients and oxygen to continue to function. From the moment we are are born, plaque – also know as hardening of the arteries begins to accumulate. This process continues throughout our life and by the time we get to 60 years old, we may have
varying degrees of plaque build up inside our arteries.
This process may happen at a faster rate if we add additional stressors such as
hypertension, diabetes, high cholesterol, cigarette smoking. In some cases, you may have a genetic predisposition to having more aggressive plaque build up at a younger age. In most cases, this plaque build up is silent – that is, it doesn’t create any symptoms or signs, and testing may not show anything abnormal. Minor plaque build up which does not cause more than 70% blockage of the coronary artery typically does not produce any symptoms or signs.
Coronary artery disease will produce symptoms when the blockage in the artery is 70% or more, or if the plaque ruptures ( breaks) leading to clot formation, and sudden
blockage of blood flow close to 100%.

So there are three scenarios that may occur as a consequence of blocked arteries
1. No symptoms – Minor blockage, less than 70% blockage and no plaque rupture

2. Chest pain on exertion – example brisk walks or climbing stairs or during sports. Typically while resting, or doing minimal exertion, there is no chest pain, but may experience chest pain while walking fast, or climbing stairs. This is considered Stable Angina Pectoris. Major blockage with at least 70% obstruction of blood flow – typically produces chest pain when you exert yourself.
3. Chest pain at rest – while lying or sitting, or doing very light activity such as bathing or other activities of daily living. Minor or major blockage WITH plaque rupture – this usually causes chest pain at rest – while sitting or lying down, or doing minor exertion, that would not have produced pain in the past. This may be either Unstable Angina Pectoris or a Myocardial infarction (heart attack). This scenario is a medical emergency and requires a visit to the nearest emergency room.

To summarize – blocked arteries may cause NO symptoms, chest pain with activity or chest pain while doing nothing.
Chest pain
This is the most common symptom that a person suffering a heart attack will experience. The pain is usually described as heaviness or pressure in the centre or to the left of the
chest and may extend to the neck, jawline, or left shoulder or even down the left arm. It may sometimes give numb feeling down the left arm. The pain usually lasts for more
than 10 minutes and you may experience shortness of breath and or palpitations along
with the chest pain. Sometimes the pain may be felt as a burning sensation and less
frequently as sharp or sticking sensation, or tightness. Sometimes the pain or discomfort is mistaken for indigestion.
Do NOT make that mistake. Any chest pain in a person 40 years or older, especially with history of diabetes, hypertension , cigarette smoking, high cholesterol, family history of early coronary artery disease – is cause for concern.
If the chest pain lasts more than 10 minutes, and fits the description above, it is a
MEDICAL EMERGENCY. Do not self-treat with antacid and “watch it”. This is a sign you should call for help – best case scenario call an ambulance or get someone to drive you to the emergency room.

A note about heart attacks in women, diabetics and the elderly.
Women, diabetics and the elderly are notorious for having heart attacks with no
symptoms or atypical symptoms. They may sometimes do not experience the heavy
chest pain in the centre of the chest, but may only experience vague numbness in the arm, or neck, sometimes just shortness of breath or a feeling of dread. In some instances, may feel light headed or may faint.
In any of these circumstances with unexplained symptoms – it is reasonable to have your doctor check for a heart attack with an ECG and some blood work after careful review of your history and detailed examination.
Next we will discuss how we confirm the presence of blocked arteries and make the
diagnosis of a myocardial infarction or angina